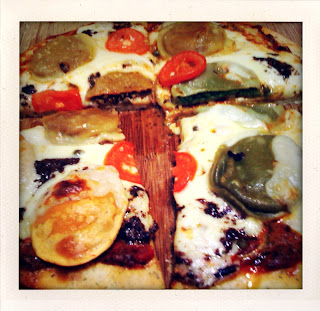 The concept for this pizza was conceived and carried out within an hour.  I couldn't decide if I wanted pizza or ravioli for dinner, so this delicious creature became my ingenious solution.  I had my pie and ate it too.

You can make your very own Ravioli Pizza.  It's easy.  Just make pizza like you normally do, and add some cooked ravioli on top before you throw it in the oven.  I used a trio of spinach, porcini mushroom and roasted red pepper raviolis for this pie.

A few tips I learned from my 1st Ravioli Pizza trial run:
1.  Let the cooked ravioli sit and dry out for 10-15 minutes after you cook it.  Pat dry if need be.  I didn't and thus there was some extra wateriness in the pasta.

2.  Place some cheese on top of the raviolis so the raviolis don't burn.  I used slices of fresh mozzarella and I experimented by placing some raviolis partially under the slices and some out in the open.  The raviolis began to brown a little too quickly.  It would be easiest to use a shredded or thinly sliced cheese to cover the raviolis.

3. Don't eat the normal amount of pizza you usually do.  These slices were heavy.  I thought I could handle two.  I could not.  I had to walk around my house like Paul Newman's egg-eating ass in Cool Hand Luke.

Directions
Make pizza like you normally do, and add ravioli.  You could even use frozen pizza (just put some extra cheese on top halfway through the cooking process).

For this pie I mixed pesto and vodka sauce together for the sauce, fresh mozarella, onions, tomatoes, and a few dashes of kalamata tapenade.  Here's some pics... 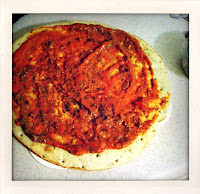 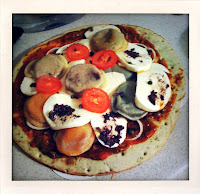 Posted by The Stoner Gourmand at 22:37