Is more then just a sweet southern nickname. 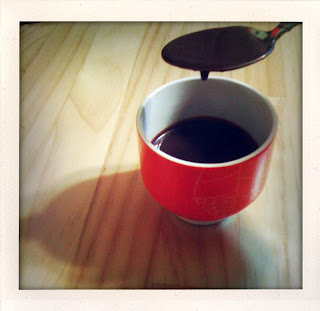 This is so easy!  I recently picked up a 99¢ box of instant chocolate pudding from Trader Joe's because  I thought it would be a cheap, easily stored, quick-fix for the sugar munchies sometime in my future.  When the time came, I was also eyeballing the bottle of irish cream in the fridge as an even quicker fix.  Then, like an eclipse - or a Venn diagram of thought- the 2 were combined... 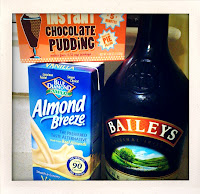 Follow directions on box.  This particular box called for 2 cups milk to be mixed in with the pudding powder.  I decided to replace 1/4 of this with the Irish Cream, but you should experiment with replacing 1/2 or all of the milk and let me know the results!

The whole prep time took about 10-15 minutes - longer if you wish to chill, which I recommend.  The shallower the container you store it in, the quicker it will cool.

Replacing 1/4 of the milk with Irish Cream imparted a noticeable alcohol "bite" to the pudding and the Irish Cream flavor mixed beautifully with the chocolate.

And it would be simply mad if you decided to pour it on some Ben & Jerry's Crème Brûlée ice cream... 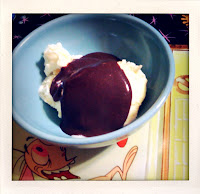 Posted by The Stoner Gourmand at 21:56